Claire Fuller talks to Reading Group Choices about her inspiration for Swimming Lessons, character motivation, and much more.

We were fortunate to have Claire Fuller answer our questions about the character relationships and symbolism in her novel, and where she got the idea!

Reading Group Choices: Did Gil find all of the letters from Ingrid or just the portion we saw? Were there others?

Claire Fuller: Well, as Gil believes, I do think a reader’s interpretation is just as valid as the author’s once the book is out there being read, so in a way it’s up to you to decide the answer to this question. Also, I don’t tend to think too much about the story beyond the bounds of the book, so I don’t know if there are more letters. In my mind though I think Gil found them all, but unfortunately he didn’t get to read the most important letter – Ingrid’s last one – which he finds in a book in the very beginning but loses before he’s had time to read it.

RGC: The questions we had after finishing the book reflected how Gil felt about books – the reader makes the book. Did you write it this way?

CF: Yes, very deliberately. I left as many gaps as I could (more than I normally would in a piece of writing) while still making the story whole and hopefully satisfying. I wanted the reader to come to their own conclusions about a number of things. 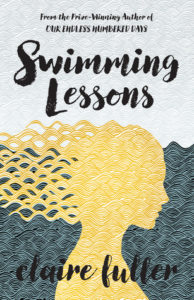 RGC: A few of us noticed a possible symbolism of the name Gil and “swimming”. We saw that Gil should have been Ingrid’s protection/lifeline, but it was actually her swimming. Was that intentional? Are we just reading into that?

CF: I love that idea, but actually I didn’t notice the connection between word Gil and swimming until after the book was published and someone pointed it out to me. Lots of things do happen subconsciously when I’m writing, so this could have been one of those. Gil’s original name was Rex, but when I showed some parts of the story early on to my daughter, she thought Rex sounded like a dog’s name, so we came up with Gil (for Gilbert).

RGC: We are curious about your writing process – did you write the letters first and then integrate them into the story or did you write it at the same time?

CF: I wrote the letters and the rest of the story at the same time. The novel started from Gil’s perspective, but when I was a little way in I thought that I didn’t really want to hear from him, I’d prefer to know what his wife and youngest daughter thought of him, so I deleted a lot of words (the only part remaining is the very beginning). But by then I’d already decided that Ingrid had disappeared, so I thought it would be good to hear from her in letters.

RGC: A couple of us were not sure if the woman in the last chapter is Ingrid, and whether that should lead us to assume she is alive. What questions or thoughts did you hope readers would have at the end of the book?

CF: I really hoped that the end of the book would make readers think and decide for themselves. And perhaps the decision they reached (even if they decided they were unsure about the woman) would reflect on the sort of person they were – hopeful or pessimistic. I wanted readers to think beyond the end of the book: if it is Ingrid what has she been doing all this time? If it isn’t Ingrid does that mean she is dead? And just to dwell a little longer on whether it is better to live with hope (and possible disappointment) or to know the truth.

RGC: It seemed like you could interpret that Gil manipulates every relationship – was this your intention from the beginning or did it evolve in the writing? (Ex. Gil and the boat ride with Flora – was he trying to keep up his good perception of caring about Ingrid being alive for Flora?)

CF: It wasn’t my intention from the beginning, because I don’t plan my novels, I let them unfold as I write, and see what will happen. It’s not only the plot that develops, but also the characters, who I discover more about as the manuscript goes along. You’re right though, Gil does manipulate every relationship, but I don’t think he knows he’s doing that, it’s just how he is (very egocentric). In your example of the boat ride, I think Gil really did hope to find Ingrid’s body with the help of the cockerel, not just for his peace of mind, but also for Flora’s. By then he thought he should try to bring an end to their hope for Ingrid to return.

RGC: We also talked about Richard’s character, and what role he played within the larger story. He seemed to provide a balance but he also seemed to display an idealization towards writers. How did Richard come to you as a connection specifically to Gil?

CF: In an early draft Viv plays quite bit of Richard’s role – the voice of reason and normality in this eccentric family, as well as hope for Flora at the very end. But later I conflated them into just Richard, and Viv became a very minor character. Richard started out normal, but then developed (as I wrote) a rather unhealthy obsession with Gil, because I was curious to see Gil from yet another person’s perspective (albeit through Flora’s point of view). I was also interested in how Gil says the reader is all important, and yet it is the writer that Richard is interested in.

RGC: We’d love to hear more about where the idea for your story came from. It’s such an interesting premise, and we were drawn in immediately by the book jacket. And what a great cover! Would love to hear about your inspiration.

CF: I love the cover so much. It was designed by Diane Chonette, Art Director at my US publisher, Tin House.

A number of things came together when I was starting to write Swimming Lessons. One was a piece of flash fiction (a 100-word story) I wrote about a man on a beach who finds various things washed up including a life-sized fibreglass giraffe’s head (which is changed to a whale’s head in the book). And the other main thing was a project that my husband and I did before we were married, and when we were still living apart. We wrote notes and hid them in each other’s houses. Then we decided that Tim would sell his place and move in with me and in process he found all five notes that I wrote to him. Eight years later there are still two in the house we share together that I haven’t found. I’m convinced they are in a couple of the books we own. But the trouble is we have thousands of books.

RGC: Are you already working on something else? Did working on this book inspire what you’re working on or thinking about working on next?

CF: I’m just finishing my third novel which will be sent to my UK and US publishers soon to see what they think. It’s about Frances who is remembering the summer of 1969 when she was commissioned to survey the follies in the garden of an English country house. There she meets Cara and Peter and is drawn unwittingly into their world of excess. Gradually Cara reveals her secrets to Frances, the house offers up some of its own, and Frances spies on her new friends through a hole she finds in her bathroom floor.

So far one novel hasn’t led to the next. This third one also comes from a piece of flash fiction I wrote about someone finding a spyhole through their floor into the flat below.