Shawn Francis Peters writes a heart-pounding account of the “Minneapolis Monster” in his newest book, The Infamous Harry Hayward.

Shawn Francis Peters recently visited Verona Public Library in Wisconsin to read and discuss his work with an audience. Shawn also kindly took the time to answer our questions after he shared part of his book!

Shawn Francis Peters: When I was in high school in Baltimore in the 1980s, I read Truman Capote’s classic true-crime book In Cold Blood. I couldn’t believe it! Here was a riveting, dramatic book—and it wasn’t a novel. It sort of opened up my mind to the possibilities of nonfiction as a genre, right on down to the sentence level. Capote’s sentences really sang. I read the book just as I was starting to identify myself as a writer, and it provided a kind of “eureka!” moment. I thought, “Hey, maybe I could do something like this someday.”

A close runner-up for the title of most influential book would be Jonathan Harr’s A Civil Action, another brilliant nonfiction narrative. The book came out in 1995, right about the time I was starting to think seriously about writing books, and it really provided a great model for how to tell a complex nonfiction law/crime story. I re-read it every couple of years for inspiration. 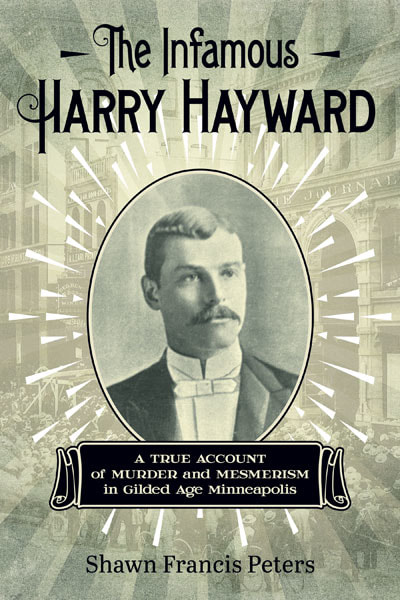 RGC: What book did you most recently recommend to someone else?

SP: Barkskins, by Annie Proulx. Somehow, I missed this idiosyncratic but brilliant novel when it came out a couple of years ago, and that was a huge mistake. Proulx manages to make a 700-page epic about the timber industry (!) riveting. I can’t recommend it enough.

RGC: What was your favorite book when you were a child?

SP: As a writer, I think I’m supposed to have a cool or impressive answer for this question—something along the lines of, “Well, on rainy days I sat next to the fire and pored over Dickens and Thackeray.” The truth, however, is somewhat more prosaic. I was a maniac about collecting baseball and football cards, and they probably constituted most of my leisure reading until I got into high school. (In retrospect, this obsessive collecting and organizing provided excellent training for my work as an historian, as a lot of the work I do involves—you guessed it—collecting and organizing.)

RGC: Who are your favorite writers?

RGC: Were you ever embarrassed about a book you loved?

SP: Honestly, no. I think books “work” when they grab you viscerally and hold your attention for page after page. I’ve read plenty of allegedly important books that were spectacularly dull, and, conversely, I’ve read a bunch of purportedly lowbrow books that were thoroughly engaging and entertaining. I don’t think there’s any shame in loathing the former and loving the latter.

RGC: Do you have a favorite musician or genre of music?

SP: I listen to a lot of music, and always have. I suppose my preferred genre would be “adult alternative” (which is maybe respectable way of saying “dad rock”). You’ll find me blasting bands and artists like Spoon, The War on Drugs, The National, Aimee Mann, Catfish and the Bottlemen, Wilco, and Ryan Adams. Snow Patrol is an all-time favorite, and I am overjoyed to report that they have just released a new album for the first time in many years.

RGC: What do you wish you knew more about?

SP: Documentary filmmaking. I’ve always wanted to extend my storytelling into that realm, but I’ve never really had the time or the opportunity. (And if anyone out there wants to team up on something or talk about a project, please hit me up.)

SP: Again, there is a temptation here to give a snobby answer about the moral superiority of vinyl, but I’m a voracious consumer of music and will take it in whatever format is convenient. I still have some mixed cassette tapes in my car that I put together in about 1999.

My writing process typically involves a laptop (coffee shop), desktop (office), and a hard copy for old-fashioned editing. As a rule, I don’t compose by longhand very much, but I do find myself rattling off paragraphs here and there on a legal pad.

SP: There are some great bookstores in Madison, but my favorite always will be the The Strand in Greenwich Village in New York City. My first job out of college was as a low-level editorial assistant in the publishing industry in Manhattan, and I spent a lot of lunch breaks hanging out in the Strand, looking through bargain books and daydreaming about becoming a writer.

RGC: Can you share a favorite line from a creative work (book/play/film/song)?

SP: Diner, the masterful 1982 Barry Levinson film, is an all-time favorite film of mine. At one point, Timothy Fenwick (played by a very young Kevin Bacon), says, “Do you ever get the feeling that there’s something going on that we don’t know about?” That line always has stuck with me because I frequently ask myself the very same question.

RGC: What do you enjoy most about doing a reading or talking about your book?

SP: Research and writing can be extremely lonely endeavors. You’re usually by yourself, and inside your own head. And even when your work comes out, you’re not typically there to share the experience with someone who’s encountering your work. So readings and talks are great way to share not only the content of a book but also the experience of putting it together.

RGC: What is something you know about or have heard about Madison or Wisconsin?

SP: Having lived here for more than 20 years, I can say that Madison is a small town. I feel that there are, at most, about two or three degrees of separation between most adults. This is generally a good thing—you can find common ground with folks pretty quickly. On the downside, Madisonians of a certain age can get swept up in nostalgia for the city’s past.

Read more about The Infamous Harry Hayward and find other great author interviews on the Reading Group Choices blog!