Celebrate wine, cocktails, and reading with these drink recipes inspired by the French Revolution and the new novel Ribbons of Scarlet!

Six celebrated authors of historical fiction—Kate Quinn, Stephanie Dray, Laura Kamoie, E. Knight, Sophie Perinot, and Heather Webb—joined to create Ribbons of Scarlet, a timely story of the power of women to start a revolution and change the world.

In late eighteenth-century France, women did not have a place in politics. But as the tide of revolution rose, women from gilded salons to the streets of Paris decided otherwise—upending a world order that had long oppressed them. 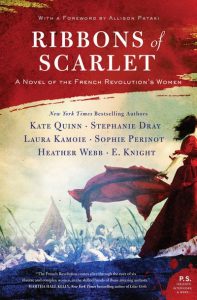 The novel illuminates the hopes, desires, and destinies of princesses and peasants, harlots and wives, fanatics and philosophers—seven unforgettable women whose paths cross during one of the most tumultuous and transformative events in history: the French Revolution.

This turbulent time did more than spark political change. It also had lasting consequences on that most important of French traditions: wine.

Ribbons of Scarlet gives book groups a perfect opportunity to celebrate like a revolutionary, philosopher or royalist with drink recipes paired to your reading!

The Power of Wine

Book clubs and wine are a perfect pairing, and as it happens, so is liquor and the French Revolution. 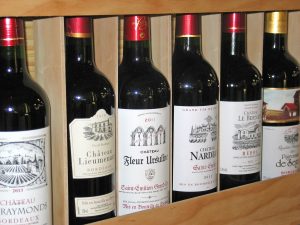 Nothing is more French than wine . . . At the time of the Revolution, wine was extremely popular across all levels of society—from champagne-sipping châteaux dwellers to the red-wine-favoring working class. By 1789, when Sophie de Grouchy visited Versailles, wine was a daily drink for a majority of Parisians, with approximately seventy-nine gallons consumed yearly per adult male in the capital. All that wine was a significant source of cash for the Ancien Régime. Taxes on alcoholic beverages entering Paris raised more money than consumption taxes on all other commodities combined, and the rate was steep. The price of a barrel of wine tripled as it passed through Paris’s tollgates.

And that, dear readers, is where alcoholic beverages and the French Revolution became partners . . . The good citizens were tired of the tax-inflated prices of their favorite beverage. While some stormed the Bastille, other Parisians made a four-day assault on the city’s tollgates. They destroyed seventy percent of them, and triumphantly rolled carts full of tax-free wine into the city. Some happy soul, doubtless after tapping into one of the celebratory barrels, actually scrawled: “finally we will drink wine at 3 sous, for too long we have been paying 12,” on the barrier de Neuilly.

“Empty All the Bottles…” 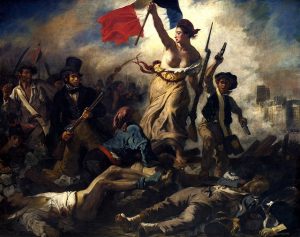 Striving for equality means material equality too . . . When the National Constituent Assembly debated how to reform the tax on wine, a number of legislators used the same Revolutionary rhetoric of fairness—insisting “equality be made material”—employed in more lofty Revolutionary discussions.  Ultimately the Assembly abolished the wine tax under tremendous pressure from the people of France. It officially ended on May 1, 1791 and, according to journalist Camille Desmoulins, over 400 wine-filled wagons entered Paris on the stroke of midnight. Later in the Revolution a parody of the La Marseillaise commemorated this victory in the following refrain: “To the table citizens, empty all the bottles: drink, drink a good pure wine which waters our lungs.”

As the Revolution progressed, a Frenchwoman’s (or Frenchman’s) choice of alcoholic beverage became increasingly political . . . In fact, as was true with what one wore, what one drank was seen as indicative of her/his political allegiance. Strident revolutionaries like the Jacobins and sans-culottes drank common red wine, while white wine and champagne remained associated with royalist-leaning aristos (a word fierce market-woman Louise Audu would certainly have pronounced with contempt). Princess Élisabeth, her brother the king, and her sister-in-law Marie Antoinette would certainly have initially enjoyed grands crus (luxury wines) even as they were held captive at the Tuileries . . . although those same wines were forbidden by the time Charlotte Corday arrived in Paris to assassinate Marat. 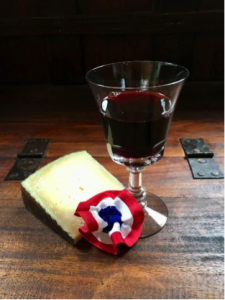 Just as they are for many book clubs, wine and other spirits were at the center of many Revolutionary-era festivities . . .  During the course of the Revolution, citizens of France repeatedly shared wine at social and communal gatherings, toasting their newfound freedoms.  Let’s all raise a glass to that!

So much for the history . . . let’s get to the booze! Just answer one question and discover the perfect drink recipes to accompany Ribbons of Scarlet. Are you a Revolutionary, a philosopher, or an aristocrat?

No multiple-ingredient, fancy mixing will be necessary. Just grab a wine glass and fill it with red (the cheaper the better).

I wield ideas not a pike, and I’d love to attend a salon with Sophie de Grouchy or Manon Roland.

What could be more perfect than a brandy-based cocktail to nurse as you mull over political nuances? 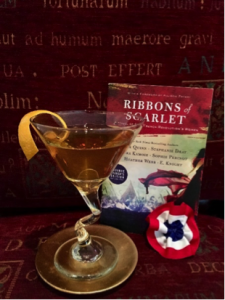 Put the cognac, Bénédictine and Cointreau into your glass, top with room temperature bubbly and give a quick stir. Settle into your chair for a long discussion of Ribbons of Scarlet or any philosophical point that tickles your fancy.

Yes I may end up riding to the guillotine in a tumbrel but at least I’ll be in company with the likes of Madame Élisabeth and Emilie de Sainte-Amaranthe.

Nothing but a champagne based cocktail will do. And the touch of red shows your sangfroid even in the face of the Terror’s blade. 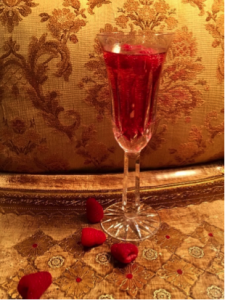 Place a few fresh raspberries in the bottom of your flute. Add the St. Germain, Chambord and Lemon juice, then fill with chilled champagne. Toast the King and Ribbons of Scarlet.

[For citations and sources, please visit this article at our website www.history360presents.com ]

Looking for other creative ideas for your group? Check out literary-themed costumes, and take your group for a walk!