Two hundred years separate Jane Austen’s Pride and Prejudice from the new novel by Sonali Dev, Pride, Prejudice, and Other Flavors. Yet the line between these two romantic comedies is clear. And Dev’s book pays homage to the Austen classic while placing its storyline squarely into our current world.

Pride and Prejudice has been called the original romantic comedy, pitting the witty and headstrong Elizabeth Bennet against (and ultimately with) Fitzwilliam Darcy. The novel established the ground rules for how these romantic stories play out:

Two characters share a dislike of each other, born of an awkward or disastrous first encounter.

Their negative opinions grow from both internal obstacles (pride, judgment) and external ones (class, social pressure).

Circumstance forces them into contact again and again, moving between moments of connection and friction.

Compatibility seems hopeless, even after one character makes a grand declaration.

But then misunderstandings are re-understood and the two end up together. 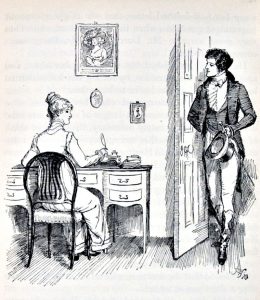 The unlikely courtship of Elizabeth and Mr. Darcy begins with distasteful overheard remarks at a ball. And then comes a misunderstanding: Darcy’s acquaintance, George Wickham, wrongly claims to Elizabeth that Darcy has deprived him of his living. Add to this Darcy’s disapproval of the marriage of Elizabeth’s sister to his friend Bingley, and the two seem destined to despise each other.

But over the course of balls and surprise encounters, intentions are explained and truths revealed. After two marriage proposals by Mr. Darcy, Elizabeth accepts.

The “comedy” part of the rom-com equation is equally important. Austen is known for her sharp wit and satiric take on the social conventions of her day, captured by Pride’s famous opening line: “It is a truth universally acknowledged, that a single man in possession of a good fortune must be in want of a wife.”

These ingredients have created a long line of Austen-inspired adaptations, books, and films. And now a novel that adds new “flavors”.

Sonali Dev’s novel honors these rom-com conventions. Dr. Trisha Raje is hailed as a genius for her skills as a neurosurgeon in San Francisco, and her innovative work has just landed her department a 10-million dollar grant. Her roots as Indian royalty have given her the pride and privilege to pursue her dreams. And yet she can’t seem to earn the approval of her demanding father, known to the family as HRH, or His Royal Highness. And she remains overshadowed by her older brother Yash, a candidate for California governor. 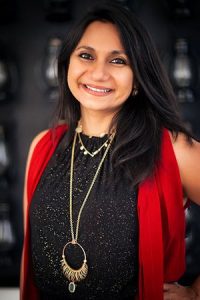 Enter DJ Caine (given name “Darcy”), an up-and-coming chef hired to cook at a political dinner for Yash. DJ needs this client and the work. He’s a recent transplant to the city, where his sister Emma awaits an operation to remove a fatal tumor, the surgery performed by no one other than Trisha.

The first encounter in the kitchen of the Raje family home presents a classic clash of personalities and misunderstanding. Trisha, famished and pressured by work and family affairs, nearly ruins an all-important dessert just before DJ is about to serve it. Add an overheard remark with a touch of class judgment, and these romantic sparring partners face a rocky start.

But DJ’s exceptional talent in the kitchen will slowly soften Trisha, and her determination to help save DJ’s sister will work its way past his prejudice. The two have a long road of self-discovery ahead of them (including a troublemaker named Wickham), straight out of Austen.

A Pride & Prejudice for Our Time

Readers of Pride, Prejudice and Other Flavors won’t be mistaken about the time period. The novel falls squarely into the diverse social and political world of racial tension and the #MeToo era.

Women in Austen’s day faced social and economic ruin if they didn’t find a reputable mate from a respectable social class. Class distinctions still exist in Dev’s novel, but they take on a whole new complexity. Trisha is descended from Indian royalty, while DJ is born to Rwandan and Indian parents, raised in England in a low-income, single-parent family. 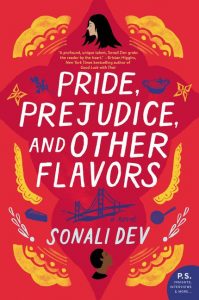 th work equally hard and carry a strong pride in their fields. Trisha’s comments about DJ as the “hired help” will force her to broaden her ways — much as DJ must do with his preconceived notions about her privilege.

Dev brings nuance to the discussion of race. When DJ accuses her of “acting white”, Trisha considers the difference between that claim and owning your own identity. The story also deals with the patriarchy, as Trisha’s male boss assumes automatic authority while discussing treatments for Emma. And after locking their keys in the car, Trisha and DJ’s attempt to break in attracts a nervous police officer. The moment of racial tension that follows quickly threatens to escalate.

The rom-com has traveled a long way, straight into modern problems and modern times.

And Other Flavors includes many references to the work that inspired it, from plot points to character names. Dev’s novel confirms the lasting appeal of Pride and Prejudice and Austen’s popularity, which ranges from spin-offs to festivals. Authors and readers continue to flock to the romantic story her work defined. What keeps them coming back? The classic themes of love and courtship? Or a craving for the familiar ways the plot unfolds?

Great questions for your next group discussion! In the meantime, feast on the latest incarnation that adds a 21st-century spin to the 19th-century rom-com original.

Read an excerpt from Pride, Prejudice, and Other Flavors here!

Looking for more introductions to great authors? Check out the featured interviews on our blog!